Exactly how does a genealogist define “family”? Is it two parents and 2.5 children? Is it every person related by blood, marriage and adoption for generations?

The Japanese trace their families in terms of the head of household, regardless of bloodline. Japan is a patrilineal society and each family household is registered with the local government through a document called a koseki. The head of household is typically the eldest son, or chounan. If there is no chounan, such as in a family with only daughters, the eldest girl will often marry a second (or third, fourth, etc.) son who then is adopted into the family, taking on the role of eldest son and changing his surname to that of his wife. In a traditional agrarian society, this was a functional way to pass on property, generally the family farm and cemetery. But what if the sons did not want to want to maintain the family farm? Again, adoption was in order. And those sons who chose this path? They were removed from the family register, not exactly disowned, but no longer recognized by the local government as “family”, thereby creating a genealogical conundrum. How does a genealogist process this information? Which line is then researched? The bloodline (which is no longer considered family)? Or the head of household line?  Gotta love the Japanese for everything except genealogy. How does a researcher choose to go about this? 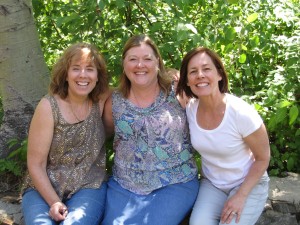 Why is it that as life turns this way and that, our friends remain straight and true? They do not judge us. They accept us through thick and thin. They cherish time together. I know that a handful of dear friends is better than a roomful of acquaintances.

This past weekend I had the pleasure of joining two dear friends for a three-day weekend. Essentially it was a three-day slumber party. No children, no pets, no husbands, no jobs, no distractions other than our silliness. Suddenly we middle-aged women were college girls again. Time had passed, but our friendship picked up where we had last left it. We didn’t miss a beat (or a meal!). We only came up for air in between giggles. What a lovely feeling. I can hardly wait for our next gathering.

“I do not wish to treat friendships daintily, but with the roughest courage. When they are real, they are not glass threads of frost-work, but the solidest thing we know.”  -Ralph Waldo Emerson

The Theft of a Computer: Learn from My Mistakes

My computer was purchased in mid-June, just before the big research trip to Washington. It was small, only 3.3 pounds, and had an adorable pink keyboard cover. Before leaving for DC, Ted backed up my data to an external hard drive. He also left the old computer intact. And then this past Saturday morning in my excitement to go to the writing class at CGS, I put my computer bag in the car, complete with wallet and digital camera. I was only in the house for a short period of time, but I left one garage door open. Big mistake. In a matter of 15 minutes, the thief rifled through the three cars in the garage, took my computer bag, a set of golf clubs and a few other items. In fact, it appears I may have even interrupted him. I recall going between the garage and kitchen several times. Was he hiding behind one car when I put my lunch bag in the backseat? How do I know he was a “he”? There were multiple roberies that day, and one woman not only got a good look at him but also got his license plate number. Of course, that may have been a stolen car. After filing a police report, having all three vehicles fully dusted for fingerprints, cancelling all credit cards and generally feeling nauseous, I had to wonder, what had I learned? Obviously, don’t leave the garage door open even for a few minutes. But in terms of genealogical research, what could I pass along? Keep your documentation in two formats (say paper and computer, or computer and thumb drive, or digital camera and computer), but DO NOT keep those two sources together. My camera and my laptop were both missing and I hadn’t finished uploading my digital images to another location. But I didn’t lose much. Well, I lost the journal entries of my experiences at the National Archives. Fortunately, this blog included many of the details. I lost some digital images of the Okazaki family records from Gila River Internment Camp, but I had already decided to re-order those images via snail mail. Luckily I didn’t have my thumb drive or i-phone stored with the computer. Those were still in the house. The moral of the story? Back up, back up, back up. And thank my lucky stars that I didn’t trap him in the garage. Oh, and be grateful for the professional behavior of the Lafayette police, particularly Officer Dennison.

That Which We Call A Rose, By Any Other Name Would Smell As Sweet

On Saturday July 7 I had the good fortune of attending my first ever “Rose” event. I was invited by the president of the Contra Costa Rose Society to attend their annual Ice Cream Social. I became friendly with fellow genealogists, Patty Click and Joy Cottril at a recent California Genealogical Society event. They were great fun and encouraged me to attend the social. I didn’t know anyone else but felt immediately at home among the rose enthusiasts, whose ages ranged from mid-twenties to late eighties or early nineties, not at all unlike CGS. The generational mix was quite to my liking. I met the soon-to-be-inducted president of the National Rose Society, along with others just as new as me, plus those of every skill level in between. As I shared my passion for both genealogy and roses with one of the younger but very experienced guests, she encouraged me to grow more old roses. She had a point. The old roses, with their hardy canes and delicate petals were the perfect metaphor for family history. I only have one old rose right now, but it is my current favorite, Graham Thomas, a beautiful buttery yellow blossom with double petals that don’t last long, especially in the wind. Technically it isn’t an old rose, but an English rose with the shape of an old rose and a heavenly fragrance. Yes, it’s time to choose some old roses as a compliment to my family research.