Santa Maria California is a beautiful coastal community. Agriculture is the predominate industry, and strawberries are a primary crop. The Osuga’s arrived in Santa Maria in the late 1920’s, with the Okazaki’s following in the early 1930’s. Maru, Sid and Tee Okazaki attended Fairlawn elementary school and Santa Maria Union High School before being forced to leave their community during WWII. Jimmy Osuga was a produce distributor and worked all over southern California, from the Santa Maria Valley to the Imperial Valley. Ichimaru Okazaki was his foreman. The two families lived just a few doors apart from each other on Church St. and attended the Japanese Union Church on Mary Dr., a methodist house of worship. Although the houses no longer exist, the two schools and the church are still vibrant community fixtures.

Our next stop was the local historical society. These organizations can be hit or miss. The docents might be uninformed or unwilling to help. My expectations were low, but I also knew that there was a rich Japanese American history in the town.  What I found was thrilling and beyond imagination.  The city directories, while not comprehensive, provided much needed addresses of the Okazaki, Osuga and Hiratzka families. Then Ted and I poured through the high school year books.  Maru, Sid and Tee lost their yearbooks along with the rest of their family possessions during the war years. We were able to photocopy many pages from those annals and can’t wait to show them to the family. The icing on the cake? The vertical files. Most libraries and historical societies have such holdings, which are essentially folders filled with loose articles, newspaper clippings and other emphemera. As we frantically photocopied all that we could, we were stunned to find letters from both Sid and Tee, written from the assembly center in Tulare shortly after they were forced from their home. On Saturday we will be at the Japanese American National Museum in Los Angeles. I can’t wait to share these findings with the docents there.

We  spent just a few short hours in Santa Maria, but thanks to the kindness of the volunteers at the historical society, we had an amazing discovery. I am so glad to have met these women, including Jo Ann McBride the head docent, Mary Lou Rabska, Sharon Eames and the newly appointed diretor of the society, Cindy Ransick. I hope they realize how helpful they were. Thank you, ladies! 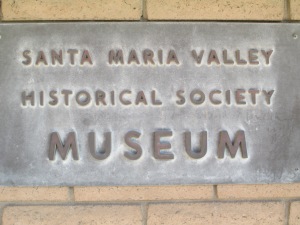