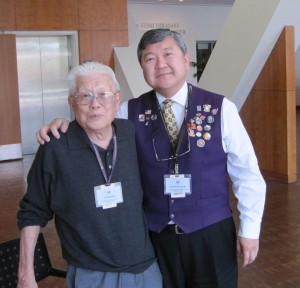 We arrived at 11 on Sunday, just as the museum opened. Sid greeted us and introduced us to several docents; Richard Watanabe was kind enough to be our guide. Enthusiastic and a natural story-teller, Richard walked us through the main body of the museum. We began our tour in an actual barrack from Heart Mountain. Richard explained that all WRA camps were similar in composition, modeled after army encampments in every way imaginable, except that the actual residents were civilians. Families and singles, young and old were housed in wooden buildings that provided little protection from the weather. Communal latrines and showers offered little privacy. Meals were served in mess halls, virtually eliminating the sense of a family dinner. The majority of individuals held in these camps were American citizens. The Department of Justice Camps had better living conditions as they were considered prisoner of war camps and therefore governed by Geneva Convention requirements.

The exhibits within the museum were arranged in chronological order and Richard moved through time in his description of the Japanese American experience before, during and after World War II. As his oration became more compelling, our group grew. What began as a tour for two soon became three, then four, then 8, until, I don’t know. 15 or 20? Emotions stirred within the group as he described the injustices placed upon the Japanese Americans. His knowledge was extensive. I was appreciative that he took the time to describe the experiences of the Germans and Italians who were interned in the DOJ Camps. He told of those of Japanese descent from Central and South America as well as the Caribbean. He explained that some native Alaskans were inadvertently interned and he described the unique ordeals of the Japanese Canadians.

Richard continued to educate the group about resettlement. He explained that each internee was given $25, the same amount given to newly released federal inmates. Imagine starting over in a country brimming with animosity toward the Japanese, with little money and no home or job. Some moved east to where jobs were available. Some Issei (Japanese born immigrants) chose to be repatriated, bringing their American citizen children with them back to Japan, as was the case with the Okazaki family. Others stuck it out and returned to their former communities.

Finally Richard explained reparations and redress to the group. Ronald Reagan signed the American Civil Liberties Act in 1988, after which internees who were alive on that date received a financial compensation as well as an apology for the injustices served.

It was a full and productive day, educational and moving. Richard Watanabe is a natural educator and I am so glad to have been part of his group today. My suggestion to anyone visiting JANM: have a docent give you a tour. Following this experience, we were able to spend a few hours using the on site research center to gather some additional data for our genealogical project.