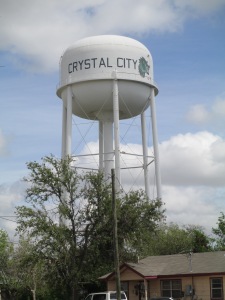 Crystal City is an interesting name for an agricultural community. The area is often called the spinach capital of the world and the unofficial mascot is Popeye. However, there is more to this locale than just spinach. Mexican Americans have lived here for generations and there is a rich and robust political activism within the community.

In addition to agriculture, politics and a nearby jail, Crystal City is perhaps most infamously noted for its World War II Internment Camp established by the Department of Defense. Most Americans are somewhat familiar with the 10 internment camps run by the War Relocation Authority, where the vast majority of individuals were confined.  The Department of Justice Camps were unique in that internees included Germans, Italians, Japanese Peruvians and others. And among these, Crystal City was particularly unique because it was a family camp. It also was a camp with the most polished image and therefore presented to the world as a model for how well internees were being treated by the U.S. goverment. Obviously, not every camp was like Crystal City and there was an element of propoganda in the way it was promoted.

Japanese and Japanese Americans had been swept up in a frenzy of anti-Asian sentiment which began well before Pearl Harbor. Unlike Caucasian immigrants, Japanese immigrants had been prohibited by law from becoming citizens or owning land. Once that fateful attack in Hawaii took place on 7 December 1941, those of Japanese descent residing on the west coast were removed from their homes, regardless of citizenship. Women and children were often separated from their husbands for many months, sometimes not knowing where the other was. In the case of Issei, or first generation immigrants who were the minority of those detained, there also was a language barrier.

Uprooted from schools, jobs and communities, taken first to assembly centers and then relocation centers before arriving in Texas, Crystal City was both a blessing and a curse. Families were finally reunited and housed in cottages. The Okazaki family had a three room duplex with a shared bathroom. Internees attended school, held jobs, joined athletic teams, grew gardens, and swam in the pool. Those who were older children at the time have fond memories. Tee remembers riding his bike and playing baseball. He was even student body president at the high school. Additionally, the internment camp provided many jobs for those who lived in the town of Crystal City.

Not all memories were or are positive. Adult internees were bitter and depressed. Those who were young remember the profound sadness of their mothers, aunties and obachans. There also were ill feelings among individuals who lived outside of the camp. Some of the residents resented the U.S. government taking over their town and building homes for the “prisoners”, homes that often were newer and bigger than their own.

After the war, some families were repatriated to their ancestral homes while others remained in the United States. Either way, post war life was difficult for all, including the residents of Crystal City.