Librarians: Linking a Community to its History

Visiting a site for research purposes is always interesting. But meeting the members of the community  really brings things to life. When planning my trip to Crystal City, I had been in contact with a number of individuals. Werner Ulrich was a former internee and great source of information. Werner was responsible for some of the displays currently on view at the former internment camp, including the map of the site. He put me in touch with Andy Rodriguez, the librarian in Crystal City.

Andy was helpful throughout our email correspondence, providing me with details about the city and the camp. He also agreed to meet me during the visit. I knew from previous research trips that librarians were usually well versed in local history and resources. What I didn’t expect was that Andy would take me on a personal tour of the former internment site, guiding me through areas not accessible to the average visitor. He took me to each marker and explained its significance. Andy grew up in Crystal City and his father had been employed at the camp in the maintenance department, giving him a unique perspective on the local history. He escorted me through Zavala Elementary school, along with Vice Principal Carmel Dias. As with most small towns, everyone seemed to be connected with one another, and Andy knew Carmel from his days as a teacher’s aide.

Behind the school, yet only accessible THROUGH the school by escort, was a display marking the educational system at the Crystal City Internment Camp, as well as two buildings original to the camp. Imagine my surprise as I looked more closely at the display which included a photo from the 1945 high school graduating class of Japanese American students. Looking up at me from that display was my American citizen father in law, proudly wearing his cap and gown, standing in the back row of his class photo. The picture was taken shortly before he and his family were “repatriated” to Japan at the end of the war. It’s hard to say who was more touched, me, Andy, Carmel, or my husband who sat there staring at his father. Ironically, Tee called our cell phone a few minutes later, not realizing we were in Crystal City. Maybe it was he who was most touched hearing that his photo was right there memorializing this bittersweet time in American history.

Andy continued the tour which included the former swimming pool and slabs of concrete foundations which were near what had once been the Okazaki “home”. Andy interspersed his knowledge of the internment camp with the history of Crystal City. When we finished our tour and returned to the library, Andy allowed us some research time with documents and books pertaining to camp. Despite all the research I have done over the past six months, much of what he shared was new to me. Additionally, his staff was helpful, cheerful and professional. Though brief, our visit to Crystal City was rewarding in many ways, due primarily to the assistance of Andy Rodriguez and the other members of the community. Thank you.

Primary monument honoring those Japanese and Japanese Americans who were interned at Crystal City, but does not recognize the Germans, Italians, Japanese Peruvians and others who also were detained here. 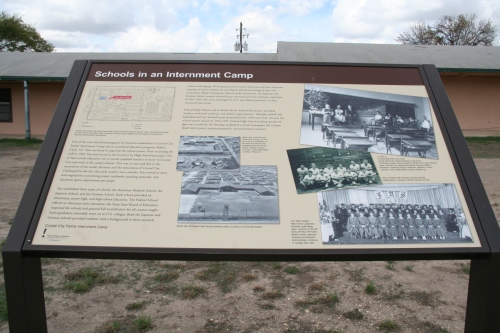 Marker located in front of what had been the German School 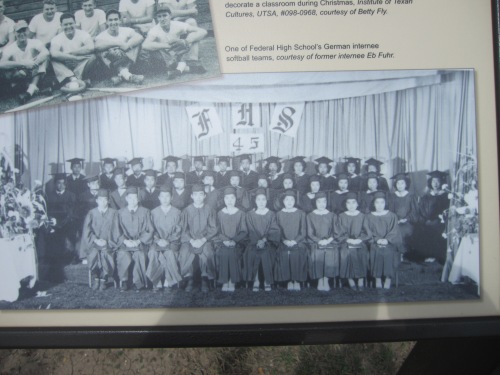 Ted on a concrete foundation near the location of the Okazaki family duplex.

In front of city hall and the public library in Crystal City.

One Comment to “Librarians: Linking a Community to its History”