What’s in a name?

Surnames are interesting in every culture. In Japan, they are a comparatively recent phenomenon. When imperial power was reinstated in 1868 and Emperor Meiji began his “restoration”, families were required to creat surnames. Meiji also began the family registration process, what is now known as the “koseki”. This was an easy and organized method of taxation. During and following the Meiji Restoration, many families suffered great economic hardship. Some were former samurai, most were farmers and the vast majority couldn’t keep up with the costs of the new era. There are more surnames in Japan than most other cultures, but the early immigrants (to Hawaii, the US, Canada, Brazil, Peru, Mexico, etc.) came from just a handful of farming prefectures; they were the individuals who suffered financially. That is why we often hear the same Japanese surnames over and over in the US, yet when we travel to Japan we discover that there are so many more.

Kanji are the Chinese characters adopted by the Japanese in the 6th C and used in writing, along with Hiragana and Katakana. Names are always written in Kanji and the Japanese take great pride is selecting given names. The meaning of a name (given or surname) is dependent upon the kanji used. Sometimes a name can be read in a variety of ways and only the family really knows for sure. Additionally, writing has evolved over the years, making it difficult to read old names. The best genealogical comparison I can think of is old German. How many of us have had challenges trying to read that? Now add one step, the translator. How does a genealogist confirm the content of a translated name or koseki? Hmmm? How do you apply the concept of confirming a fact with a second source if you can’t read either one?

After finishing up most of what I could accomplish during this trip regarding the Okazaki surname, I began to tackle “Miyake”, Ted’s maternal line. His Miyake’s were from Kurashiki and Yorishima. Apparently this is a VERY common surname in the region. According to one auntie, the family are Heike descendants, the losing warriors in the 12th C battle between the Heike and the Genji. These individuals fled into the hills and became farmers in the region, a tale also told by the Okazaki family. A nearby mountain was called Miyake Zaka; when families were required to create surnames, many in this region chose “Miyake”.

We collected the Miyake koseki last year and during this trip we photographed the family kakocho (death register), prayed at the bustudan and visited the familial cemetery in Yorishima. Japan is literally dotted with small cemeteries. This hillside was no different; there were thousands of ohaka (tombstones) just within this cemetery alone, from the bottom of the hill and up into the forest. It was interesting to note that many of the ohaka had the same kamon (family crest) as ours. Within the confines of our Miyake plot, thirteen ohaka belonged specifically to Ted’s direct ancestors and were written in the kakocho. Those beyond the thirteen known ancestors perplexed me; Auntie explained that many, many generations ago, there likely was a connection. Unfortunately there was no proof; written information that far back only contained the buddhist death name and date, and we had no way of obtaining the kakocho details for the other stones. Many of the stones were so old that the engravings were completely obliterated. Nevertheless, it was a beautiful site overlooking the entire bay. 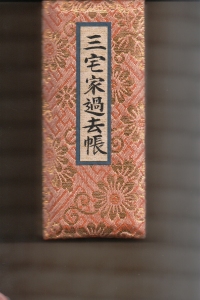 Two days later we visited the temple in Kurashiki, Okayama-ken. I casually commented (in English) that an oil painting looked a lot like the village of Yorishima. The guide turned to Ted and said (in Japanese) that he must be a Miyake. So desu, neh! Apparently nearly every family in Yorishima was one of two surnames, Miyake or of one beginning with “Oka”, meaning cape or small bay. Yorishima is a small fishing village on a protected inlet, also called a cape. Among Japanese whose surname begins with “Oka”, it is always prudent to ask about the kanji in their name. Usually those whose kanji is the same as ours also have ancestors from Okayama.

At the Temple in Kurashiki