Since the beginning of our trip, we wanted to go to the Diplomatic Archives Facility of the Ministry of Foreign Affairs and see what we could learn. Would we be able to get in the door? Would access to documents be restricted? Exactly what documents did they have that would be genealogically relevant? And could someone help us read whatever it was that we were looking at? 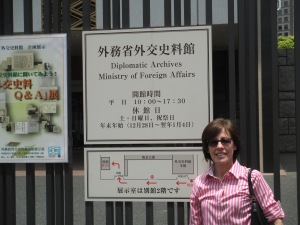 Diplomatic Archives Map Showing Us Where NOT To Go

I really wanted to find Sasanji’s immigration record but knew that would be like finding a needle in a haystack. I have been searching for his arrival in the US for quite some time. There were several possible hits, but nothing solid. So, we hopped in yet another taxi and were dropped in the middle of Azabudai, perplexed as to where the building was even located.

Wandering in the hot sun, we stumbled upon a large brick building that looked promising. No, just the post office. Then we found a sign for the right building with arrows directing us to the entrance. It was closed. Backtracking to the original sign, we boldly walked into the building, feigning gaijin ignorance.

Stopped at the front desk by a timid woman who seemed skeptical about our intentions, we kept at it, filled out the Japanese forms in English, placed our possessions into a locker and were escorted into what appeared to be a research room. It looked familiar. Computers? Check. Microfilm readers? Check? Rows of books that looked like finding aids? Check. Pleasant employee who spoke English? Double check. Filled out more Japanese forms in English then presented our passports. Oops. Left mine in the hotel. Not a good move. But we continued to ask a steady stream of questions. What records were available? Could we get emigration records? Fortunately, I had my laptop ready, complete with database AND copies of the Okazaki koseki.

Yonai-san explained that the immigration/emigration records were housed in the Legal Affairs Department and they would be “difficult” to find. Not sure if that meant we couldn’t search or if the records didn’t exist, or something else entirely. It’s hard to decipher that level of Japanese. He did, however, have microfilm records equivalent to passport applications. And there were no restrictions on access. If we knew the approximate time the ancestors left Japan, where they arrived in the US, the kanji in their names, their addresses and where they applied for a passport/visa, there was a remote chance we could find something. Hmm. Didn’t sound good. He looked in a finding aid to see what microfilm we might begin with. Sasanji may or may not have come to the US in 1898, he may or may not have come through San Francisco, he lived in Okayama-ken and may have applied for a passport there or Kanagawa-ken or Kobe or Yokohama or… oh my! So we decided to start with the applications in 1898 from Okayama and see how quickly we would become glassy-eyed.  At least they were in alphabetical order. 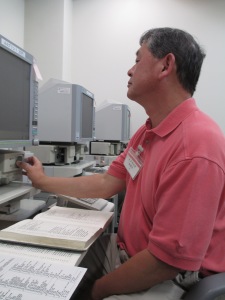 At the Microfilm Reader 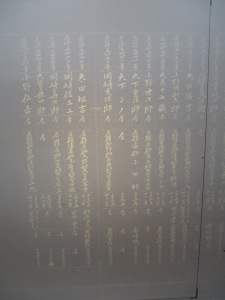 And there it was. On 11 April 1898, Sasanji Okazaki was issued passport (or travel) #5462. The name and address matched that on the koseki. Although the date of emigration and the ship were not listed, he was bound for British Canada and planned to farm there. Canada!? I always knew that was a possibility, but now I had evidence. It got even better when we found Sasanji’s son, Ichimaru. The icing on the cake? Not only did we print the images from microfilm, Yonai-san brought the original documents for us to view and photograph. He told us it was a miracle. He really couldn’t believe we found this so quickly and so easily. This really was a golden moment.