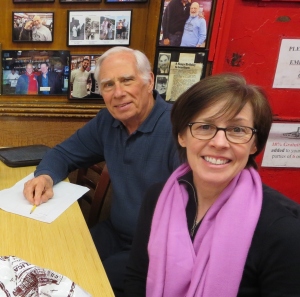 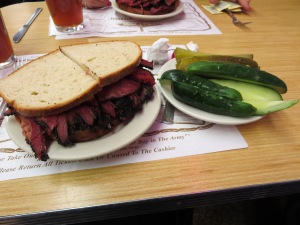 A true but bittersweet tale.

A Lutheran German American who was imprisoned in the U.S. as a very young boy has lunch at a Jewish deli in Manhattan with a Catholic genealogist from California. They talk about internment camps in the United States where Germans, Italians, and Japanese were detained.

Recently I had the pleasure of meeting Werner Ulricht in person. He has been pivotal in my understanding of the Enemy Alien Detention Facility in Crystal City Texas. We have corresponded regularly over the past two years, but it’s always rewarding to meet a fellow researcher in person.

Most of us are familiar with the concept of Internment Camps during World War II; 120,000 individuals of Japanese descent were incarcerated. Lesser known is the story of German and Italian internees, thousands of whom were secretly transported (kidnapped) to the U.S. from central and south America. Some of the individuals were not released until more than a year after the end of World War II.

Werner is an American who was born to German immigrant parents; they were legal residents of the United States. His father was arrested during World War II, just as many Japanese immigrants were arrested. He and his family were incarcerated, first at Ellis Island and then Crystal City, Texas.  He is passionate about sharing this segment of history. The federal records of Werner’s family, and the thousands of other incarcerated German and Italian descendants and immigrants  can be found at the National Archives. These include case files, medical records, school records, arrest warrants and more.

Werner has done a magnificent job of teaching others about this dark period in our history. He was instrumental in developing the interpretive panels now on display in Crystal City at the site of that former internment camp. He even created a digitized map of the camp with such detail that the surnames of the families are labeled on each dwelling.

Unlike the Japanese residents of the United States (citizens or aliens), the Germans and Italians never received reparations or even an apology from our government. Why do so few Americans know this part of our history? Those of us who teach about Japanese Internment need to share the entire story and commemorate all individuals who were incarcerated, including the Aleutians, the Japanese Latin Americans (particularly the Japanese Peruvians), and most importantly, the Italians and Germans.

Thank you, Werner, for teaching us to remember.